Get in touch with us.

Succeeded! Your message has been sent successfully.
×

Get in touch with us.

Support the project
The first Future Congress on planet Earth in the year 2017 was a great success!
Here are a few impressions of the day:

The preparations for the Future Congress 2017 began one day before on site with a creative, artistic and visual transformation of the place. Motivated and creative beings turned the J2C office into a futuristic space, equipped and prepared for the announced landing of the spaceship, with friendly support from the Material Mafia and a galactic decoration team.

On the morning of the congress, the spectacular spaceship landed in the garden of the site before the eyes of the fascinated congress visitors.

An alien cyborg that was kindly provided by X49RN greeted the present earthlings.

Afterwards, the Open Space was opened, a time-space technology in which all beings could contribute and realize their workshop ideas. We witnessed all different kinds of workshop offerings from poetry, sociocracy to a telepathy workshop.

In order to supply all the galactic beings with food, the time-traveling history researcher Bilbo, appeared with her open-air soup kitchen, in which the legendary Bärensuppe was prepared by all participants. 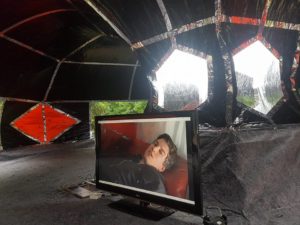 In the spaceship there was a screen showing some time witnesses that she interviewed during her time travels in various places. People came to her couch and spoke about their traumas caused by the ruling money system.

During the tasting of the nutritious bear soup, a vision round took place, in which ideas and next steps for the Project Earth were shared and collected. Add your ideas here, too.

At the end of the congress, all the cosmic beings and galactic spirits joined together in the silent disco audio game BÄMORY.

The last dancers of the evening concluded the day with a moving improvisation dance simultaneously on various planets.

Parallel to the events of the day, individual sequences were shot for the Project Earth movie. The aim of the congress was to communicate this idea further on planet Earth and to connect people, initiatives and projects. We are looking for more intergalactic time travelers, creative and active humans on the planet to join the project and contribute their ideas.

Here you can submit your visions and project ideas
Our goal is to connect people together in order to realize these projects and to document them in a documentary way and to incorporate them in our film.

We would like to thank J2C, Material Mafia and the decoration team, especially Alfredo and Charlotte for the magic and support!

We would like to invite all participants to collect feedback for the event, so we can improve the future congress concept. You can do that here or down in the comments.

We collected a little bit less donations than we spent on food and drinks from our pockets. Maybe the donation sink was not so visible? No worries, you can still support us online.

Please support our work with a donation here.